This article translated what I wrote in japanese into English. Although it may be unclear by the expression of English, if you read this article you can grasp the image of ADK

neokichi
Hello. In this article, what are the features and promises of the cryptocurrency ADK I am investing? I will explain what kind of project is easy to understand.

neokichi
Would like to know more about ADK, Check this artcle as well!

・Aidos Kuneen, Aidos, ADK, or whatever you want to call it, EXPLAINED｜sumac microfinance bank

・This is to record my opinions about the solidity of “Aidos Kuneen”.(here in after, this is called “ADK”.)

myako
establishing an offshore bank! ! … what does it mean?

neokichi
The main project of ADK is to establish an offshore bank, having said that What is “offshore“ first? I will explain from that.

What is the offshore market targeted by ADK?

neokichi
Offshore banks are banks where we are able to manage and possess money by opening accounts in “a tax haven（No-tax or Low-tax areas .） ” You can legally control taxes by depositing your own funds in an offshore bank account in a tax haven.（DEPENDS ON THE COUNTRY’S LAW YOU LIVE.）

neokichi
Do not worry,this method is legal.
Google,Windows, Apple and something like these large company is doing it as well. That means that..It is legal!

myako
Well, I was relieved if those large company use it. It is interesting how much wealthy people are using offshore banks. .

neokichi
This offshore market is tremendously big, … It is said that There is 30trilion USD!

neokichi
It has been said that The market of cryptocurrency is about 300bilion usd now. You can compare with that and imagine how much big it is.

neokichi
Of course It couldn’t be possible that ADK takes all of them.but Ricardo Bodoer has said that “We could get 0.5% of the market”

myako
Eh! It is hard to believe. .

neokichi
Of course that will happen when everything is going well.If it is not going well..It won’t happen. However,The maeket is huge. There is a chance for taking some of it!

myako
It is amazing. but will it be possible? I think that tough to beat..

neokichi
I will explain what the ADK actually does.

neokichi
First of all, There is some famous countries which have offshore banks like Hong Kong,Singapore,The UK etc..but recently AEOI system came out. for thoes countries which joined AEOI, We have to give our name,address,country of residence..In other words, our information(income,savings and any other) is taken by countries.

myako
If I use an offshore bank that participates as AEOI,is it difficult to avoide tax?

neokichi
Yeah,That’s right! so even in offshore countries, If they are in on AEOI system, The wealthians seem to be worried that the assets they are depositing might be unveiled someday..Therefore, ADK will make offshore banks in Non-AEOI countries.

myako
I see. It would be great for keeping them secret.But isn’t there possibility that Non-AEOI countries would participate in AEOI in the future?

neokichi
That would happen some times,but Non-AEOI countries don’t have a merit of being AEOI in the first place. This is because that Getting offshore money as a tax haven makes the countries which is Non-AEOI better!

myako
Now I get that point.

a lot of tax haven-country is a small sized country at first. and there are a few domestic industries. so They get profit from offshore money. It has been said that it is difficult to regulate those countries which means that that deprives the countries of income sources.

neokichi
And ADK has already acquired the shares of two banks in Kenya and Tanzania which are Non-AEOI countries and ADK is already a major shareholder! 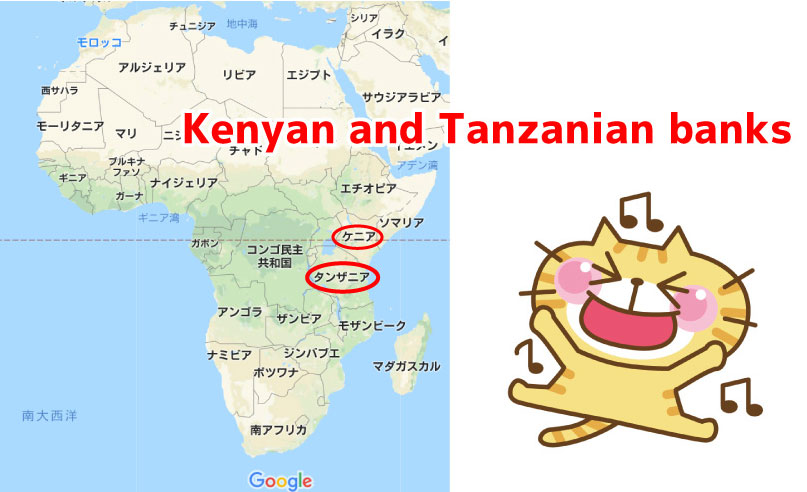 myako
Sounds awesome! Which bank are they anyway?

neokichi
The name of Kenyan bank is “Sumac Microfinance Bank” There are photos of founder of ADK on their website.

Below is an announcement from ADK ‘s official Twitter.

#Aidos_kuneen Is happy to make our Acquisition of 16%+ in Kenyan Sumac bank official. We also want to congratulate ADK founder Mr Badoer for his Seat in the board of directors in the bank . Name of our Tanzanian bank to follow soon.

neokichi
Sumac Microfinance Bank has a head office in Nairobi and it is a microfinance bank consisting of three branches (NGARA, KOINAGE, GITHUNGURI). They won the fastest growing sector of microfinance at Think Business Awards 2018.

Micro finance is a small-scale finance, providing financial services such as small loans and savings for poor people, helping to operate the micro-projects to get on their feet, aiming to escape from poverty of financial services That’s it.

neokichi
An official document issued by The Central Bank of Kenya came out on June 5th 2018. This is a document that the public institution just proves that ADK has got the shares! 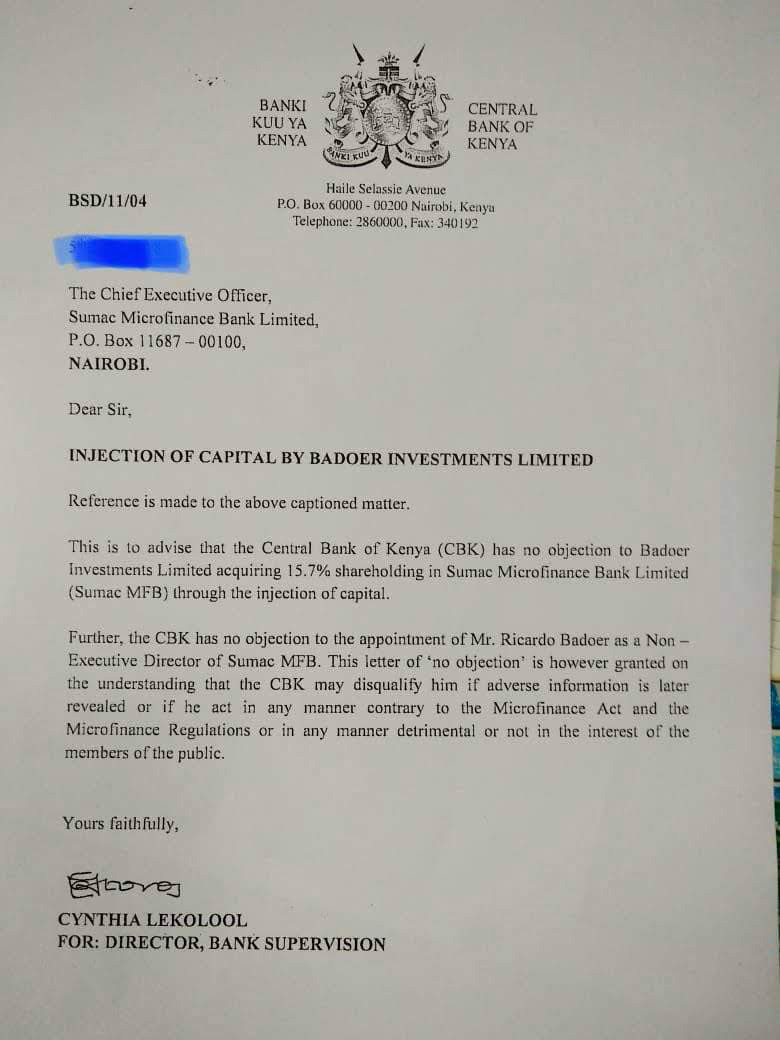 neokichi
Ricardo Badoer (Founder of ADK) also appeard on the website on July 24th as a boad menbaer. 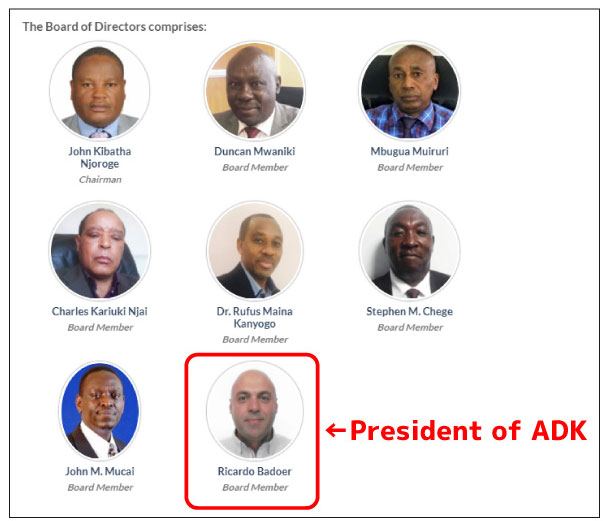 neokichi
The name of Tanzanian bank is “Hakika Bank”

neokichi
ADK has acquired 23% of the shares of Hakika Bank. Hakika Bank has been given a bank license from the central bank, and its customer base is solid.

neokichi
now they have two banks in Kenya and Tanzania, but they will get more bank in the world and to merge is their plan.That would bring ADK more storonger!

for those who don’t have any bank accounts will be able to get the account!

neokichi
ADK will be able to let people who cannot have a bank account to open a bank account easily. Using a mobile terminal and ADK makes it possible to do that cheaply.(There seems to be 2billion people with poverty who can’t have one.)

neokichi
Actually, in Africa, mobile payment called “M – Pesa” is very popular now.Using ADK could easily have a online account with mobile terminal. And ADK is No-fee for transfer. so it would be easy to use micropayment such as small amount payment. (I will explain later!)

myako
Great! People in Afirica are already familiar with mobile payment! If the fee is free and can have an account, There is a lot of chance to let those people to use ADK!

Other movements of ADK

Using ADK is available on Online-casino

neokichi
Bitcoin(onlinecasino) accepts ADK for betting on their casino. Using a lot of ADK in a variety of fields is good for Liquidity of ADK.

Making ETF in the future.

neokichi
ADK is also aiming to be listed into as ETF. When it will happen,We can easily have ADK by ourselves.That means a huge amount of funds would flow into ADK!

neokichi
ETF is about a “listed investment trust” and If we explain it briefly, The securites company distributes and invests in several ways. That investment destination is called ETF.

neokichi
..You get it? I mean that the securites company purchase and manage ADK at once. so there is no need to manage to buy ADK by yourself. If you ask the securities company for investment It means that you invest including ADK.

myako
Now I get it! Buying ETF(If ADK in it) means we can invest ADK even if we know about ADK or not. That is one of target of ADK!

neokichi
However, the details of ETF are not clear yet.and It will take a time. so much for ETF at this time.

As the founder mentioned with confidence that ETF can be happend on Telegram.

neokichi
at the earliest, ETF will happen in 3 months. The founder have talked with CEO of stock exchange in Nairobi and have been doing technical testing.
It could happen earlier than expected!

myako
oh, you mean it? it seemed that hopefully it will happen someday.. but now we can expect that soon!

neokichi
ADK could be the first ETF in the crypto world ahead of BTC.if things happen, it would be breaking news!

neokichi
I heard the news that ADK will be listed on the Nairobi Stock Exchange (NSE) as the world’s first ETF!

myako
great! That means that we only have to wait for the list to actually be on the NSE ♪

neokichi
Fanaka TV（East Africa）intreviewed the founder of ADK.
Regarding to Cryptocurrency ＆ETF, conversations with vice-president and so on.
in the interview , He said that He will make ETE happen in 3months! That is amazing!
Following video is highlights of the interview. let’s check this!

What if offshore bank happened?

neokichi
I will explain the flow when the offshore bank is happend. At first, these 4points would be made.

neokichi
Once the above four points are achieved,It will become possible to keep our funds secretly at the offshore bank ADK will own.

neokichi
Because ADK is untraceble. It is not possible where we send money. That’s why that is the system that we can deposit our fund to the offshore bank without tracking.

myako
Indeed, It seems that it is necessary to buy ADK once to send to an account.But if so, everyone would eventually exchange to fiat.Will the value of ADK go up or..?

neokichi
You have the point. Some of them are do that so.but other than that we can hold ADK itself as well.Holding ADK could rise that valu.that happens possibly. or just for asset diversification.

myako
That’s ture! I will hold as ADK when that comes up.

neokichi
From now I will introduce the technology of ADK. It is hard to explain about technical aspects. so is going to be only basic parts. ADK adopts “DAG” called iMesh, not using blockchain as Bitcoin and so on.”DAG” has already used by “IOTA””Byteball”and ADK is the third DAG used currency. To put it simply, The latest version of the blockchain! You can easily imagine what “DAG” is. and there are three features of “DAG”